Jennifer has written an open letter to her Dad for Father's Day, listing 10 happy memories of her Dad.  I thought it was such a lovely idea that I felt inspired to do the same.
My dad died in 1983 at the age of 73, but I probably think about him every day.  Here are some of my memories:

Riding pillion on his motorcycle, and him taking me round the roads near Sandbach to see the subsidence from the salt mines (I was terrified and thought we would fall into a hole in the road)

Building me a transistor radio out of a kit

Buying me my first car on the understanding that I would pay him back when I started earning, but writing off the debt when only partly paid

And the most important - taking me at weekends to the teacher training college where he worked as a lab assistant, setting up little experiments for me and so influencing me to take up science  (he was so proud when I qualified as a pharmacist) 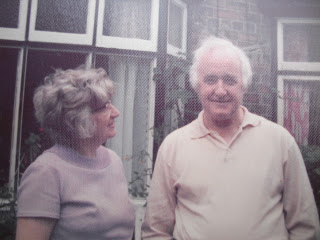 Dad had a great interest in early radio and television, and just before he died was teaching himself programming on one of the first home computers.  He didn't live to see the internet.  Here you are Dad, broadcast to the whole world.

A lovely post, I'm all teary! Thank you for sharing some of your memories xoxo

Thank you, he was lovely

Such a beautiful tribute to an obviously hugely respected gentleman.

Tears in my eyes too, I wish I could have known him. Thank you for sharing.

Hi Helen and thanks for linking up.
I remember my Grandad having a three-wheeler.
And isn't it weird to think we can remember a time when there was no internet? How did we get by?!!!
Your Dad sounds lovely. Listing memories like you and Jennifer have makes me wonder which of the things we do with our children will make their list when they're older.

Tear jerking tribute to a Dad who clearly was much loved.

He sounds like he was a wonderful man, Helen! You have beautiful, one of a kind memories of him!

What a lovely tribute to your Dad. Xx

It's amazing what our parents inspire us to achieve. Obviously a much loved man.

Beautiful post, your Dad sounds so lovely. Brought a tear to my eye x